Goods and services both useful and whimsical in Los Angeles and Hollywood.

Kids like to hang out here. It's a tourist stop, but has some interesting shopping, too.

Yes, it's a tourist stop, but it's also a fun place to go shopping for foods and items that you don't have in your city. If you live in Hollywood, it's also a good place to take visiting relatives. zSB(3,3)

This place is a Hollywood Boulevard institution. In 1946, Frederick came to Hollywood Or shall we say, a man named Frederick Mellinger founded Frederick's of Hollywood and a legend was born. Mellinger believed that incredible lingerie could make a woman feel beautiful—from the inside out. More than fifty years later, the company is still the leading trendsetter in intimate apparel and has earned a renowned reputation for flattering women of all sizes with its sexy signature styles. Frederick's found success in creating lingerie that is sexy, fresh and sophisticated. A new star on Hollywood Boulevard When Frederick Mellinger set out to create lingerie that made women beautiful, suddenly unmentionables were worth mentioning. Introducing little black underthings to the United States may have raised a few eyebrows with the American public, but it was a smash with many a glamorous Hollywood actress—the ones women worshipped as their style icons. After the opening of the first Frederick's of Hollywood store in 1947, the same Tinseltown stars who graced America's big screens and magazines came to rely on Frederick's for the sexy glamour that embodied the Hollywood lifestyle.

Right next to the Farmers Market, The Grove offers some nice shopping stops including Abercrombie and Fitch's west coast flagship store.

You'll find some interesting shopping in the complex.

OK, it's not physically in Hollywood, but it's so Hollywood it has to be on this list. Self-described as "We are the only company on the planet that offers the general public the opportunity to purchase actual wardrobe and props from movie and TV sets," it's a fun place just to browse.

This pedestrian-friendly street is lined with plenty of shopping opportunities, from vintage clothing to chic boutiques, and it's a great people-watching spot, too.

They're play publishers and author's representatives, around since 1830, but they also operate a couple of fantastic bookstores dedicated to book about the entertainment industry. They also host frequent author events.

The most popular Rodeo Drive activities are window-shopping and people-watching, both less damaging to the pocketbook than its intended activity: shopping. While the shops are expensive, don't worry about looking out of place. Tourists abound, clad in off-the-rack fashions, gawking just like you might be.

Via Rodeo, a European-styled shopping complex that resembles a movie set, sits at Rodeo Drive and Wilshire Boulevard. It's the best place for an "I was there" photo, just below Via Rodeo sign.

The rest of the street is understated, with single-story, plain shop fronts. A walk will take you past designer clothing shops by Armani, Gucci and Coco Chanel; jewelers Cartier, Tiffany and Harry Winston; and exclusive couturiers where you need an appointment just to get in the door.

If your stroll leaves you wanting to see more of Beverly Hills, meet the Beverly Hills Trolley at Rodeo Drive and Payton for a 40-minute tour (hourly Tuesday through Saturday in July and August and Thanksgiving 1 through Christmas Eve, Saturdays only the rest of the year). A small fee is charged. This tour is more fun and informative than the sometimes-schlocky tours that leave from Hollywood Boulevard and less expensive, too.

The large hotel at Rodeo Drive and Wilshire is the place where Julia Roberts and Richard Gere found love in the 1991 film, Pretty Woman . The Lobby Bar looks out into Rodeo Drive and serves wine by the glass and an afternoon tea some say is best outside London.

Just around the corner from Rodeo on Wilshire, you'll find department stores such as I. Magnin, Saks Fifth Avenue and Nieman Marcus. On the streets parallel to Rodeo, you'll find the same kind of shops that are in any upscale shopping area, a good place to make a purchase and tell your friends at home: "I bought it in Beverly Hills."

Where Is Rodeo Drive Located?

From Hollywood, follow Sunset Boulevard west and turn left onto Wilshire just after you pass the Beverly Hills Hotel. Continue past Santa Monica Boulevard to the shopping area.

Via Rodeo: On Dayton Way, north of its intersection with Rodeo Drive. Valet parking, but no parking charge. Take the driveway leading down into the underground garage. While it looks more like a hotel entrance than a parking garage, this is a valet-only parking lot. Be sure to stow your receipt safely; you'll need it to retrieve your vehicle even if there's no charge.

Start your day off right with our Free Continental Breakfast.

Take a refreshing dip in our Seasonal Outdoor Pool. 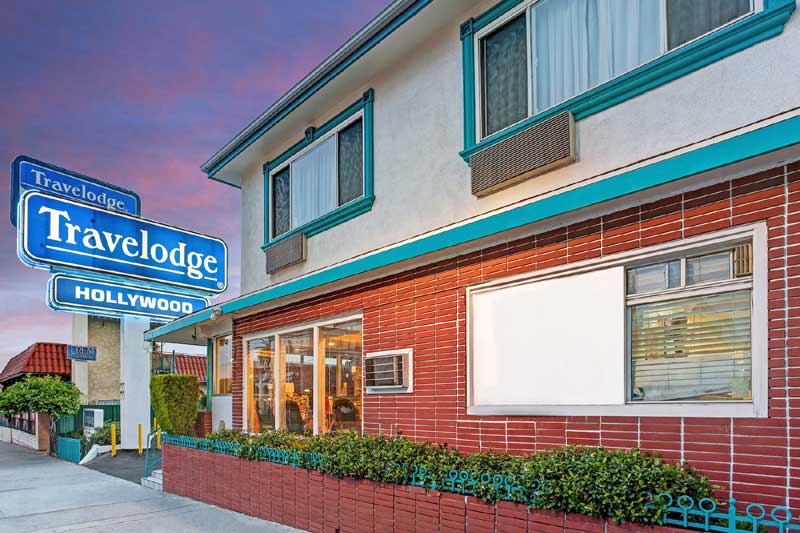 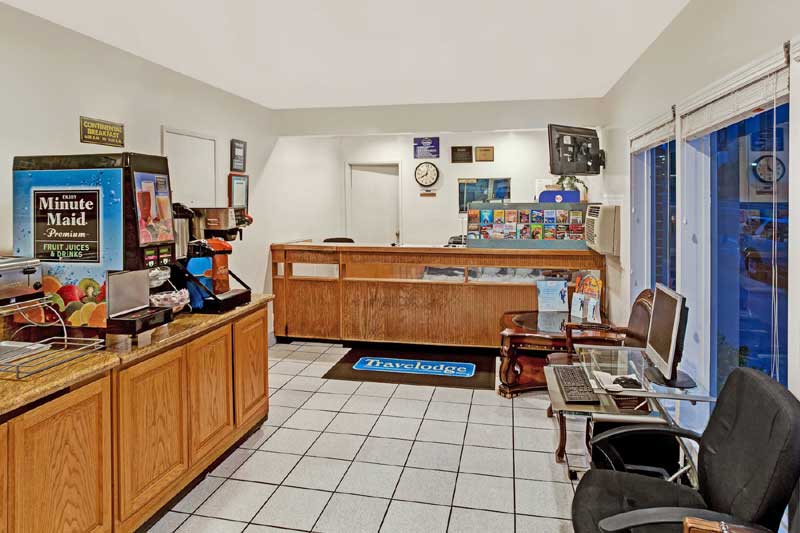 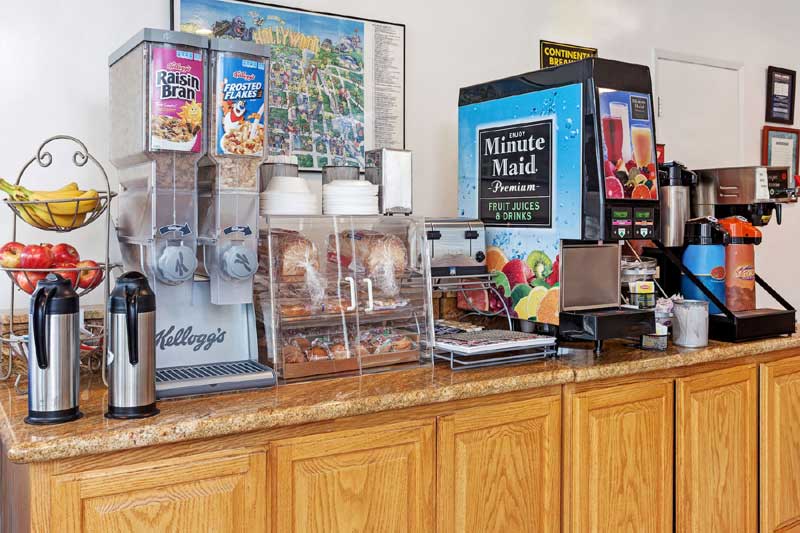 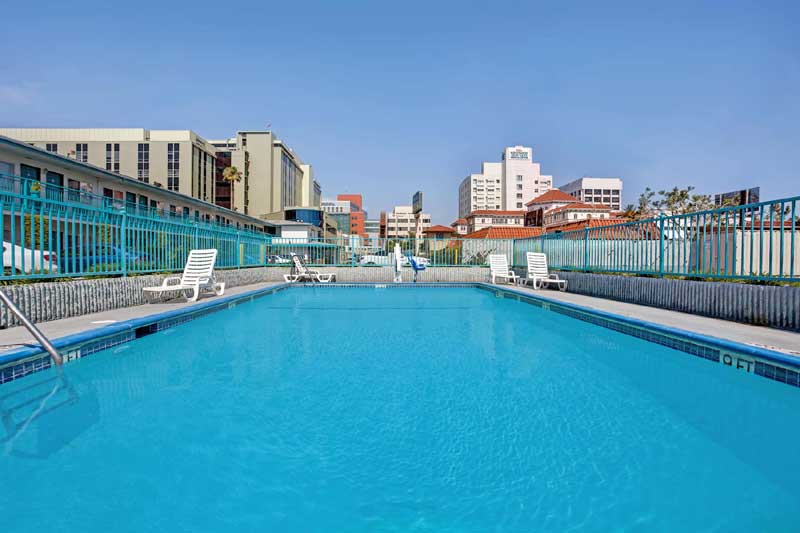 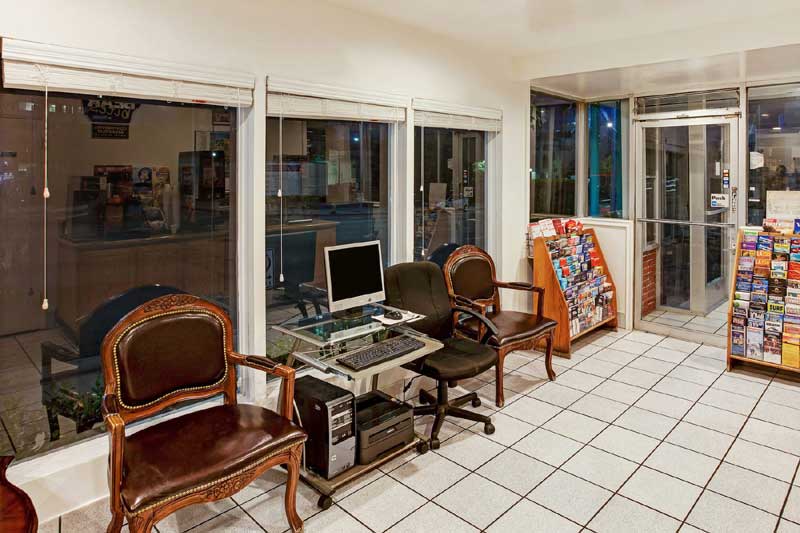 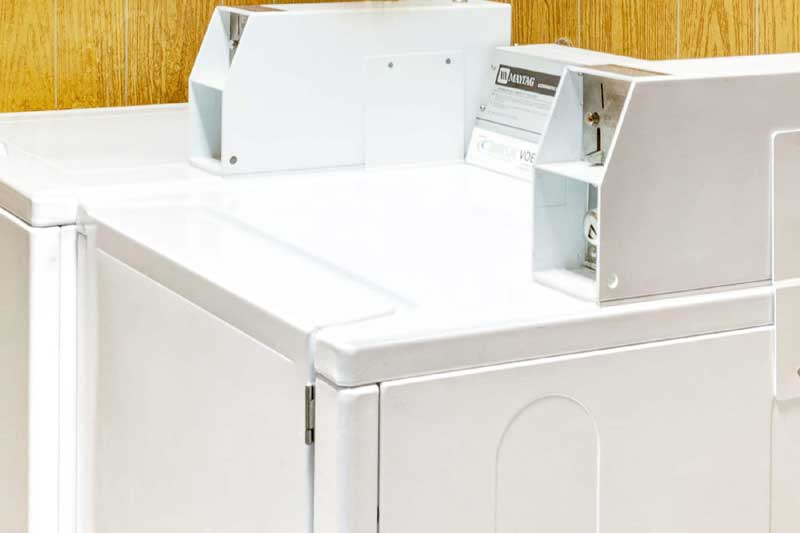 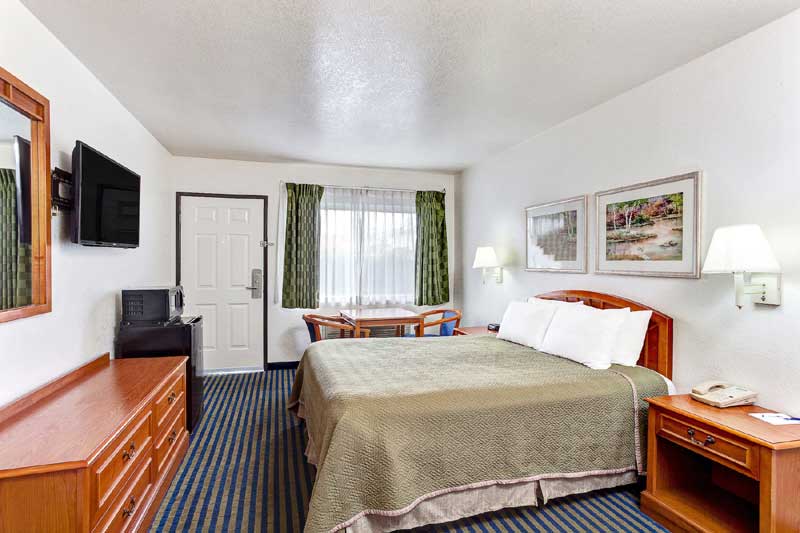 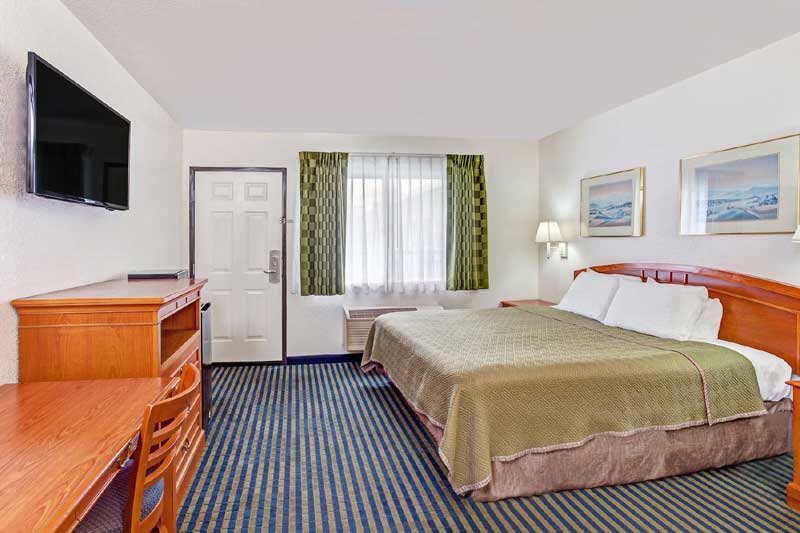 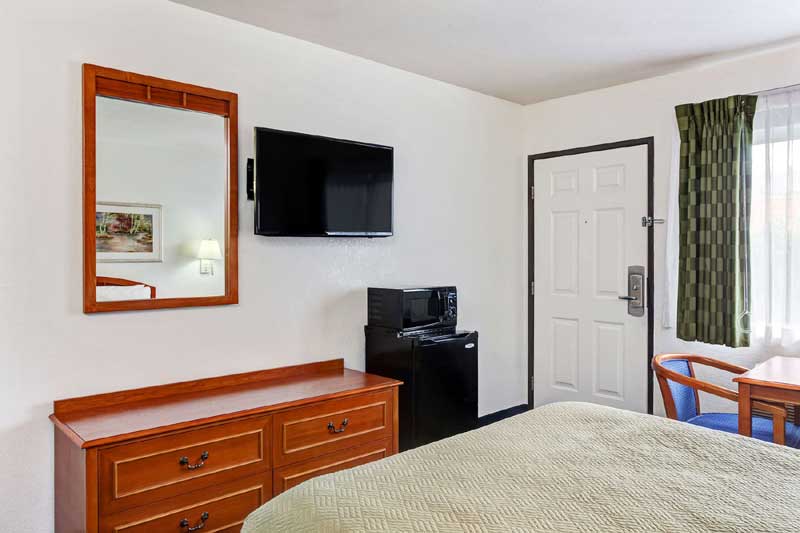 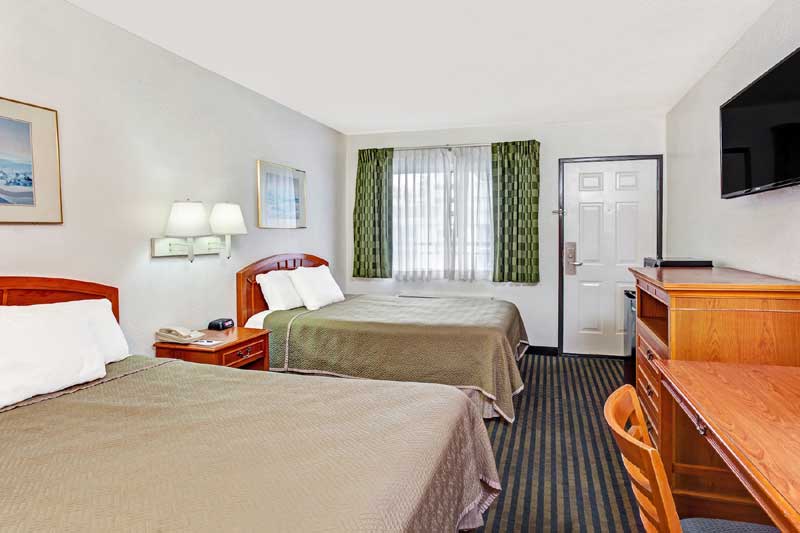 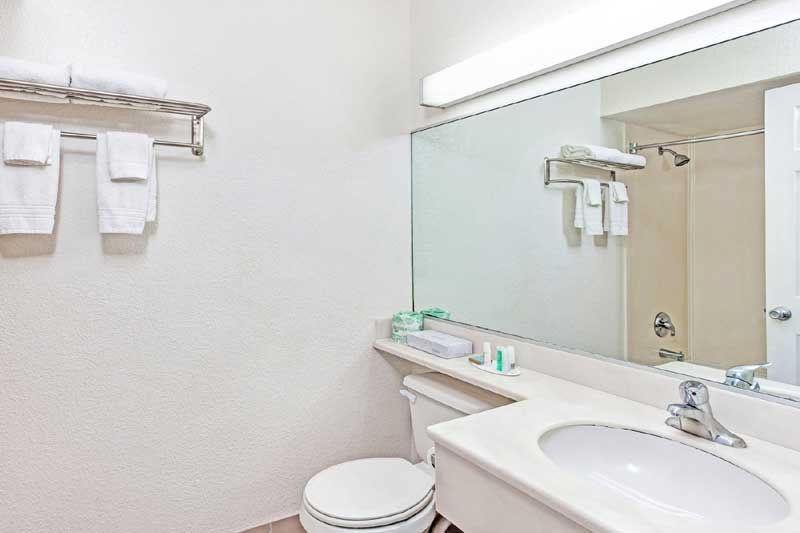 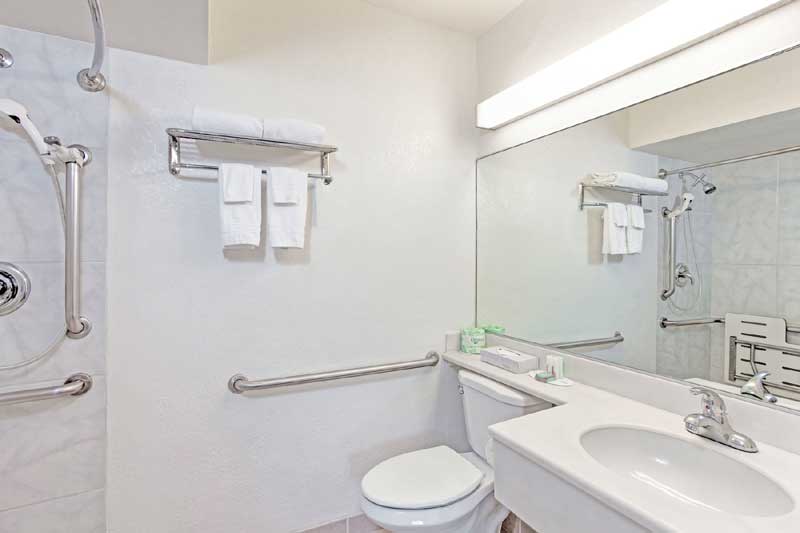 Fun things to do Hollywood